The history and tradition of the Filippi wine growing family continues and flourishes today with each new vintage as 4th generation Joseph ‘J.P.’ Filippi builds upon over 90 years in the historic Cucamonga-Guasti wine growing area.

Since 1994, the Filippis have revitalized old vineyards and undertaken new vine plantings. They continue working to restore the historic Ellena Bros./Regina Winery with the City of Rancho Cucamonga.

On March 31st 1995 the United States Treasury Department’s Bureau of Alcohol, Tobacco, and Firearms (BATF) ruled Cucamonga Valley an approved viticulture area ( View Appellation ). This was the result of a petition written and filed by our winery specifically for us and other vintners and growers in the area. This new law enabled wineries use of the words Cucamonga Valley on their wine labels utilizing at least 85% Cucamonga grapes. 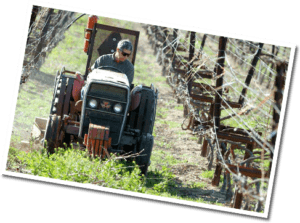 Joseph Filippi wines are the result of a craftsmanship derived from tradition, passion, skill and artistry. The fifth-generation winery is establishing itself among California’s finest producers, while remaining true to the family’s heritage of excellence in Cucamonga Valley winemaking.

Since 1995, the winery has undertaken several new acres of vineyard plantings and vineyard revitalization projects in the Etiwanda area of Rancho Cucamonga. Premium red grape varietals include Petite Sirah, Grenache Noir, Tannat, Mourvedre, Merlot, Cabernet Franc, Cabernet Sauvignon, Alicante, Tempranillo and Syrah. New vine plantings in cooperation with the City of Rancho Cucamonga and the Rails to Trails project, the Cucamonga Valley Water District, Red Hill Country Club, and other private entities are scheduled for 2008 through 2010.

The Filippis’ have expanded their operation and are producing delicious award-winning vintages, according to industry experts. “It’s pretty amazing what they’ve been able to do,” says Dan Berger, a Sonoma County wine columnist whose credentials include a nine-year stint as the Los Angeles Times wine writer. “It’s not an easy business to be in,” Berger said. “But the Filippis are really reaching out and making great strides. They’ve produced excellent wines and they’re improving all the time.”

The winery operates a winery tasting and sales location in Rancho Cucamonga. Throughout the winery’s spacious tasting areas, adult guests may sample reserve barrel-aged releases and award-winners, and purchase bottles available solely at the winery. A knowledgeable and wine-friendly staff offers you personal service in the recommendation of wines that will not only suit your palate, but also complement important occasions and special cuisine.

Joseph Filippi Winery & Vineyards has earned over 200 Awards for winemaking excellence in the past 30 years. Award-winning varieties include Zinfandels, Grenaches, Cabernets, Syrah, Petite Sirah and Mourvedre blends, Sauvignon Blanc, Sherries, Ports and Angelica wines. Visitors are always welcome at our wineries to taste any our delicious wines and ask any questions they may have about wines. Come share our passion for the grape!

The Filippi family has grown premium wine grapes in the Cucamonga area continuously since 1922. In keeping with the City of Rancho Cucamonga’s commitment to honor its viticulture heritage, the ongoing restoration/preservation and planting serves as a deserving tribute to the early vintner lineage that has made Rancho Cucamonga what it is today.

The Mini Stallions at Regina Winery 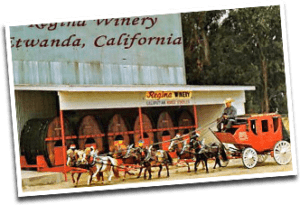 In 1962, John Elena sold 12 miniature stallions to the Regina Winery in Etiwanda, California. The winery was interested in the minis as a promotional gimmick. Nearly all U.S. Falabella miniature horses descend from those 12 California stallions, and nearly all minis have some Falabella blood.

Among the mini-horses imported into California for the winery was a Falabella stallion named “Chianti.” This magnificent leopard appaloosa stallion became one of the most famous miniature horse stallions in the country, and his name is found on the pedigrees of many miniature horses today. Interestingly, the winery incorrectly referred to these tiny horses as Lilliputian horses.

The team of Falabella mini stallions from the winery was used to advertise Regina wines by pulling a stagecoach in parades bearing the Winery’s crest. You can see them in the photo above. The beautiful, spotted mini horse team from Etiwanda were seen in many parades pulling a scaled down stagecoach bearing the EtiwandaWinery’s crest. The mini stagecoach and horseswere also on view to all visitors who came to the winery.

They were paraded as main events in shows and fairs, such as the Tournament of Roses, Pasadena, Ca, The National Orange Show in San Bernardino, Ca, and the California State Fair in Sacramento, Ca, becoming a favorite breed type for California miniature horse ranchers today.

In 1920, Giovanni Filippi and his young son Joseph came to California from the Veneto region of Northern Italy to live a dream. Since 1922, the Filippi family has grown premium wine grapes in the Cucamonga Valley. The history and tradition of the Filippi winegrowing family continues and flourishes today with each new vintage.  We take pride in growing upon our family’s wine growing presence in Cucamonga Valley, California’s oldest wine district. Joseph Filippi Reserve wines are the result of a craftsmanship derived from family tradition, passion, skill and artistry.

The history and tradition of the Filippi family continues to flourish under fourth generation vintners.

With this advanced level of winemaking expertise, Joseph Filippi Winery is gaining reputation as one of California’s finest producers. 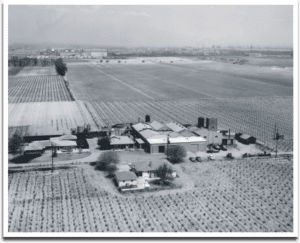 Our original winery was located east of Etiwanda Ave., north and south of Jurupa Ave. on approximately 350 acres. Started in 1922 we grew Palomino, Grenache, Salvador, Mission and Golden Chasslas grapes. Except for electricity we were self contained. We had our own wells, two of them, one for irrigation and a domestic well for the homes and the winery.

At full capacity this facility would crush and press 60 to 100 ton of grape per day, it was alot of work even with modern tools. All of the wine tanks combined would hold over 8 million bottles wine. We would receive grape from Coachella Valley in 22 ton trucks, or from Cucamonga Valley we used the WW2 2.5 ton surplus Army Trucks. These held up to 6 tons of grape. They didn’t go fast but they got the job done hauling 6 ton of grape in deep sand vineyards. During harvest the whole valley was abuzz with these Army trucks everywhere. I remember once at Haven and Foothill one of Don Galleano’s trucks flipped over , boy what a mess that was. No one was hurt. Donald and I would drive trucks from the fields to Brookside Winery on Arrow just east of the 15 FWY, (the facility is still there), and trucks would be lined up for a half mile waiting to dump, Donald would take cuts at the front of the line, everyone would be mad as hell ! Don would come out to one of my fields and move a truck forward to help out, but he would rev the engine and dump the clutch on purpose to break the drive shaft. My dad would yell at him, chase him around the field, dad never did catch him.

As a youngster I can remember when groups of hunters would hunt rabbits because there were too many….. they were called “rabbit drives”. There were so many rabbits that the take would fill two or three pickup loads. Then all the hunters would clean and dress the game. This was my first learning experience at responsible hunting, only take what you will eat. At 6 years old, I also was able to meet Italian prize fighter Primo Carnerra during one of the hunts.

Today that land is covered with concrete buildings but we are still growing those same grape varieties as well as ones that are new to the area. Varieties that have never been grown here before. In 1993 we moved from this location to the old Regina Winery where we are currently located. The wines are excellent so please, come and share the past and present with us at the winery!